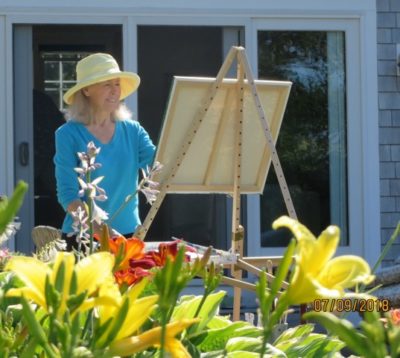 Tilda McGee Bystrom turned to her life-long hobby after retiring from a 34-year teaching career, taking classes in painting and drawing under private instruction, and at the Chatham Creative Arts Center. She quickly captured the notice of her instructors who encouraged her to develop her talents. Tilda took classes in perspective, landscape painting, portraiture, and life-drawing over the next several years, developing her techniques and finding her style.

Today she has received recognition for capturing the beauty of the Cape Cod landscape. Tilda’s paintings reflect her attention to detail – reflections on the water, the shadows cast by the sun, her ability to discover the exact shades of color the the mood of the scene suggests – all blend to create a unique and memorable work of art. She is also well-known for her miniatures of local historic sights, homes, and businesses, as well as miniatures of her well-known paintings.

Reproductions of her paintings have appeared on note cards, business calendars, and magazines. In 2008 she was commissioned to paint a mural for Youth Hostel International at the Eastham site. In 2009, one of her paintings was chosen for the cover of the Chatham Guidebook by Thompson Printing, and in 2010, she was chosen to do two sections of the mural depicting the 20th anniversary of First Night Chatham which is displayed at the Chatham Community Center on Main Street.

In 2014, Tilda’s studio was featured in the Chatham Cultural Council’s Art Studio Tour, and Stillwater Gardens was the setting for a Plein Air workshop conducted by Cathy Anderson for the Creative Arts Center. Tilda continues to support various charitable fund-raisers such as The Marconi Center, The Chatham Children’s Fund, The Fisherman’s Alliance, Pleasant Bay Community Boating, Wild Care and The Creative Arts Center through donations of her artwork.

This past year Tilda was honored to be chosen for the Orpheum Theater’s Artists series, where a video of her career as an artist was shown, and her paintings were featured in their foyer. Also, her design was chosen for the 2016 Chatham Angel Fund’s Christmas ornament, and she had a one-man showing at the Fisherman’s Alliance, where she partnered with them to raise funds.

For the past five years her designs for the Merchant’s Association of the Chatham Chamber of Commerce “Sharks in the Park” have been in the top-price range category, raising money for various local charities. Tilda continues to be a favorite among local artists, and her work is well-represented in homes throughout Chatham, as well as throughout the USA and abroad.

In 2018 and again in 2019, Tilda was selected to take part in the Chatham Bars Inn Winter Art Series. Tilda presented a one-man show each year, featuring her “Chatham Neighborhoods” and “Summer by the Sea” collections. .

Tilda is an active member of the following groups and organizations:
The Chatham Creative Arts Center
The Arts Foundation of Cape Cod
The Cape Cod Museum of Art
The Chatham Chamber of Commerce
The Chatham Merchants Association